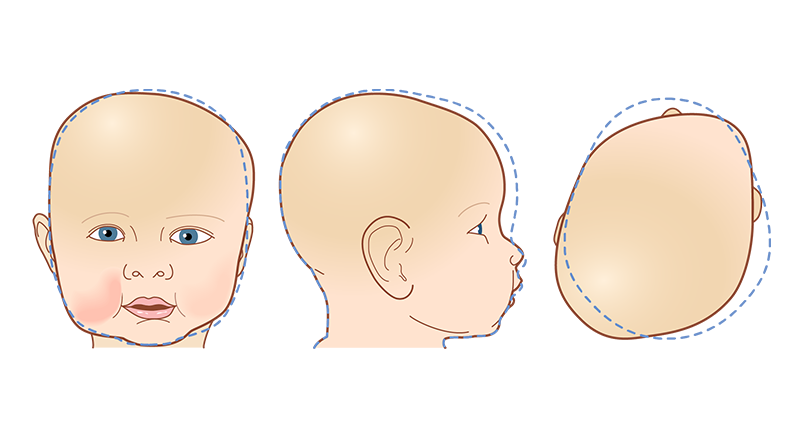 Plagiocephaly refers to the occurrence of a misshapen or asymmetrical head-shape. It is the most common variation of several related conditions. These include head shapes that are flat on one side resembling a parallelogram from above (plagiocephaly); long and narrow (scaphocephaly); and wide and flat back of head (brachycephaly). These conditions typically occur in infants, and can be caused by a restrictive intrauterine environment during pregnancy, pressure exerted on the skull during birth, congenital muscular torticollis, or excessive positioning of the infant on its back. A related condition involves a premature union of the skull bones; this is known as craniosynostosis.

Since the early 1990’s the incidence of plagiocephaly has increased, with studies suggesting up to one occurrence in every 60 births. This is attributed to the accepted protocol of positioning newborns on their backs. Although this practice has been effective in greatly reducing the risk of Sudden Infant Death Syndrome, it has also increased the occurrence of this consequence.

However, plagiocephaly most commonly occurs secondary to the presence of Torticollis or CMT, a condition in which difficulty turning the head causes an infant’s head to tilt to one side. Research on Plagio-Torticollis relationship has resulted with factual evidence resulting with as much as 70-80% of babies with plagiocephaly will present with torticollis as the primary cause of deformity. Because of the relationship between torticollis and plagiocephaly, the Cranial Therapy Center network was established to offer effective treatment of these conditions at their different stages: preventing cranial deformity before it actually develops, and treating the condition when it does exist.

Plagiocephaly does not present an immediate danger to your baby’s well-being. However, it is a condition that should not be ignored. Plagiocephaly will usually not ‘cure itself’ or just go away. When left untreated, the condition is likely to have psycho-social repercussions on children especially as they grow older. Children are keenly aware of “flaws” or differences in their appearances; a misshapen head can thus have far-reaching effects on a child’s self-image and social standing. Moreover, recent studies suggest that plagiocephaly may contribute to developmental difficulties in vision, auditory processing, cerebral function, and dental function.

If you are concerned about the shape of your child’s head, do not hesitate to consult your pediatrician who will determine the need for professional assessment and treatment.

Typically, cranial deformities are treated with a Cranial Remolding Orthoses commonly referred to as a ‘helmet’, a clinically proven method that gradually reshapes the baby’s head to normal shape. However, recent clinical studies indicate that many infants with mild to moderate cases can achieve equally effective results by undergoing physical therapy or even by following a simple regimen of repositioning techniques such as “tummy time”.

The Cranial Therapy Centers collaborate with physicians to prescribe and provide the most effective but least invasive treatment module.